Help with my murray river turtle

Hi I have a 1 year old Murray River Turtle he hasn't been feeling well the past couple of days he just comes up for air and then just flops back to The Ground. he hasn't eaten anything I've tried to give him food by hand he won't eat it. I'm at a loss on what to do. he has the proper lighting and the heating's all fine in his tank I'm just worried that I've got small pebbles in the tank and I'm not sure if he's eaten them .can someone advise me on what I need to do please

Hi, it's normal for turtles, especially once they're sub adult size to not eat every day, my turtles that size only get fed twice a week, they sometimes fast to empty their digestive tract if they've been gorging themselves. Other than that, turtles will cease feeding if the temp is too low for metabolism of the food and if the temp is too high they'll regurgitate the contents of their stomachs to avoid the food rotting inside them. Your turtle's aquarium water should be no higher than 24 degrees C. It should have daily access to a basking hot spot of at least 36 degrees C.

What does your turtle normally eat and how often?? Bare in mind that a Murray river turtle, like all short-necked sp in the Emydura complex are primarily herbivorous. 80+% of their diet ultimately needs to consist of aquatic plants, aquatic weeds and filamentous algae. When I say herbivorous, I mean literally what I just said, this does NOT mean you can feed your turtle fruit and vegetables meant for human consumption. You should be offering your turtle things like Elodea (oxygen weed), Valisneria (ribbon weed), Azolla, duckweed, frogbit and watercress. Other natural food items you can offer are Small whole live fish like fire-tail gudgeons, small freshwater shrimps, small yabbies (claws removed), earthworms, silkworms, black soldier fly larvae, woodies.
Things you should absolutely avoid feeding your turtle: - Frozen turtle dinners, mealworms, crickets, any fruit or vegetables intended for human consumption, ESPECIALLY peas, corn, broccoli, spinach and kale.

The aquarium gravel you have as a substrate is a huge risk factor, if accidentally ingested by the turtle it will cause a complete blockage of its digestive tract and it'll need surgery to have it removed. Freshwater turtles should always be kept on natural river sand mixed with calgrit.
I will attach an X-ray of a turtle kept on aquarium gravel - 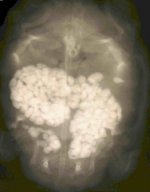 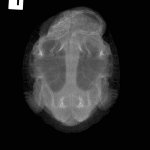 Another key point is your turtle's aquarium is far too shallow, it cannot even swim freely. A turtle should be forced to tread water to breathe not just stand up... Such a shallow tank will cause your turtle to develop skeletal deformities, have underdeveloped muscle tone and respiratory and cardiovascular issues.. .Turtle aquariums should have a water level at least 60cm deep. 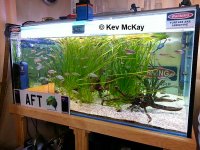 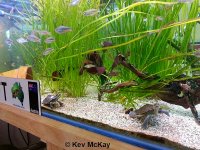 All Emydura sp are aquatic grazers, this is why they have a parrot-like beak 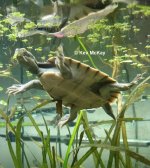 I suggest firstly that your turtle isn't overly hungry or it's not feeling the best which can be remedied by a bit of a drastic husbandry overhaul.
Do you have a complete water chemistry test kit to test for all parameters - pH, GH, KH, Ammonia, Nitrite, Nitrate, salinity, etc??
P

This is the one I wait all year for
2