Help with possible snake in the house!

I was hoping to get the experts opinions on some poo we just found in the house. I believe it's a snake but not sure if it's a python or elapid? Also given the scale could you estimate it's size?

Identifying the depositor of a scat requires a lot of expertise and experience, and even then it is not always possible to do so 100%. So I would not hold my breath waiting for an answer.

Having said that, there are still some clues here that I reckon allow us to answer your question. Firstly, with the white urates present it is either avian or reptilian. Given the drag marks and being inside the house, birds are out. The bigger the animal, the larger the scat that is produced. So the owner is relatively small. There is a lot of moisture present so this would indicate a lot of water in the diet. Clearly drinking may also effect this. Anyway, plant material such as fruits contain a lot more moisture than animals prey, so this leans towards it being a lizard. The urates are well separated from the faecal matter and the faecal pellet is stretched out at one end, indicating the animal was on the move whist doing its business. There are also drag marks from the tail. These are in a straight line. Tails on snakes are usually relatively short and light and tend to be lifted clear when the vent is opened. Even if the drag marks were from a snake’s tail (or vent area), you would expect a sinusoidal pattern from a moving individual. If it were using rectilinear motion, due to the floor surface being too slippery for lateral undulations, it would be moving slowly and the urates and poo would be closer and the faecal pellet less stretched. The width and length of the drag marks also indicate the animal had a heavy and relatively broad tail.

Short answer – it looks like your bluetongue has been for a visit and left a calling card. To confirm this you can don a pair of latex gloves and place the faecal pellet into a takeaway container (or similar) half filled with water. Once the pellet has softened, gently tease it apart and look for bits of snail shell, insect legs, mouth parts, wing cover etc. or bits of leaf or flowers. Any of these items, but especially

Here is a pic of my 1m spotted python's scat to compare. 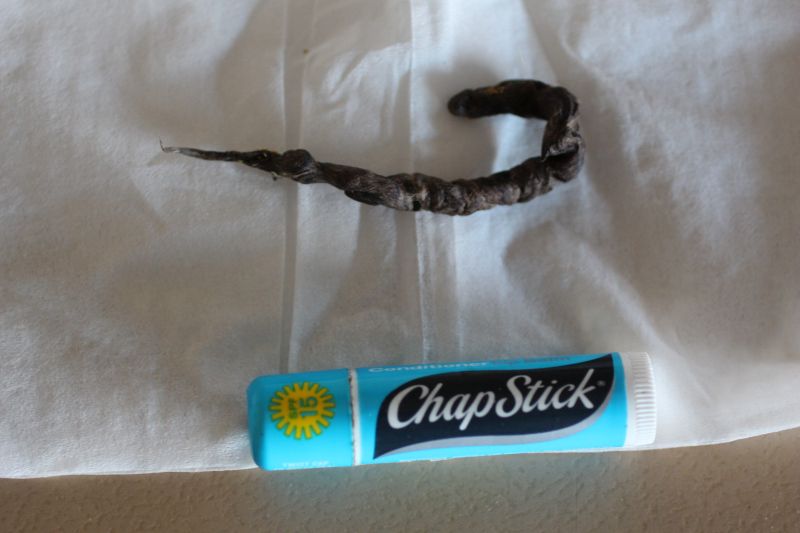 Two ways in which your mystery scat and this one differ, are that this one is considerably drier and lumpy, both typical attributes of python poo.
Last edited: Oct 15, 2020

B
worried about snake longevity