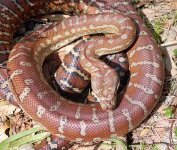 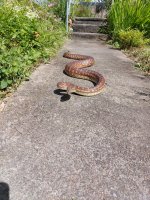 My question regards the comparitive sizes of the heads of different python species. Boris here is around 7ft long at approx 8 or 9 years old...so pretty much full grown..?
He is healthy by all appearances...but compared to other pythons Ive seen ..wild Diamonds and captive GTP.with big chunky heads...he has a pointy little head...is this normal ? do Bredlis have small heads compared to other species?...
Food size is the biggest rats I can get...and last season he got a live rabbit...which he frightened to death and ate backwards..ie bum first with ease..

Yes, my bredli's have a smaller head to body size than the coastals i see round here.

Nice looking snake and it's head to body ratio looks fine.However you should find that any disproportionate ratio of head v body size in most captive members of the Carpet Python complex is generally a result of exponential growth as a result of regular feeding regimes in captivity.

The taxonomy originally used by Gow to elevate Bredli's (aka Central Carpet Python) to species level (Python bredli) in 1981 and as well as that used by Wells and Wellington to separate others of the spilota group and elevate to species level based on location, colouration and patterning was very poor but as the wording of the International Code of Zoological Nomenclature (ICZN) leaves considerable room for interpretation the elevation to species/subspecies for some members of the group was accepted. So at the moment we are all stuck with it. In addition the recent move to reclassify Bredli from Morelia spilota bredli to Morelia bredli appears to have been done without formal taxonomic treatment.

Due to the minimal standards of what has been acceptable to classify a species of reptile it leaves the question, "Are they truly genuine individual species or subspecies?", open and still up for debate. (It should be noted that dependent on whom you talk to the terms species and sub species relating to an individual taxon are acceptable to the taxonomic community) So, without going in to too much detail, what that means is, that all members of the group can be referred to as a species ie:- Bredli Python (Morelia bredli), or sub species ie:- (Morelia spilota bredli), Coastal Carpet (Morelia mcdowelli) or (Morelia spilota mcdowelli). However; there is a valid argument they are all just phylogenetic representatives of the one species. That being "a group or complex of animals that are actually a single species which encompass a lot of variations", variations in the case of spilota mainly relates to colour and pattern" of which according to the ICZN, along with location, are not considered unique enough characteristics to elevate individual animals within a group to species level.

In saying all that, as it stands at the moment their individual classifications are currently accepted and as such valid. That is at least until someone bothers to look into their classifications.
M

Thanks for the replies guys...thats interesting info.

A Virus Wiped Out 90% of This Turtle Species. Can It Recover?