Release pic from a Relocation job today - Brisbane - midday, from a suburban kitchen!

I wish I could have got some more pics at release - but any thoughts appreciated. 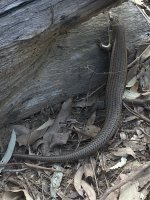 It is a Major Skink Bellatorias frerei.
It has a cream edge to the eyelid (Liopholis and Bellatorias genera). The very large size, dark lateral band with scattered white markings and lines through the dorsal scales forming fine lines the length of the body.
Bloody awesome find - I'm jealous.
G

Thanks mate - I was thinking the same - but have never come across one quite this large before .... From a length perspective I was leaning toward a Land Mullet (Bellatorias major), but on markings was more in keeping with a B. frerei. I would be grateful and open to others' opinions. Not that I doubt Bluetongue1 ... I am just terrible with lizard/skink ID. (Give me a snake anyday.)

I'm glad it was relocated within 25 metres of the front door if it is a B. frerei - as I read somewhere they mate for life and exist in a semi-ordered social groups?

Thanks sincerely for taking the time to reply - greatly appreciated!
B

Sorry Greg for not replying sooner - I didn’t realise you had posted again.

A close friend who I used to do most of my herping with as a young bloke, had a Major Skink. So I immediately recognised what it was when I saw your photo. BTW using a field guide such as the book by Wilson and Swan, or Cogger, and/or the AROD site on the net, by Stewart Macdonald, is the best way to check out what species look like. You can also use a search engine for images, however these are considerably less reliable as it is not uncommon for images to be incorrectly labelled. I should add that with IDs in an urban area, I don’t simply assume it is from that location, as you can sometimes get an escapee well outside of its natural range.

I must admit I really don’t know much about Major Skinks. I recall that my mate’s one was pretty skittish, could run like the clappers when put down on an open grass area, and was a really substantial size. Other long-tailed skinks that can get to a similar or larger size include the Land Mullet, Yakka Skink and some of the Slender Bluetongues (Cyclodomorphus). The Arnhem Land Skink also gets up there, but it is rare and endangered

With long-term monogamy I was only aware of it in Shinglebacks and Gidgee Skinks. So did a bit of research reading based on your comment, but could find very little info on the species. They seem to be thought to be similar to Land Mullets, living in small family colonies in community burrows, with one dominant adult male and only young males are tolerated. I know that this arrangement is what they believe lead to monogamy in the Gidgee Slink, so what you say could likely be the case.

Thanks for the comments. It made for interesting research. Only problem is I now have to catch up on other things I was supposed to be doing, lol.

V
Introduction, thankful for any advice