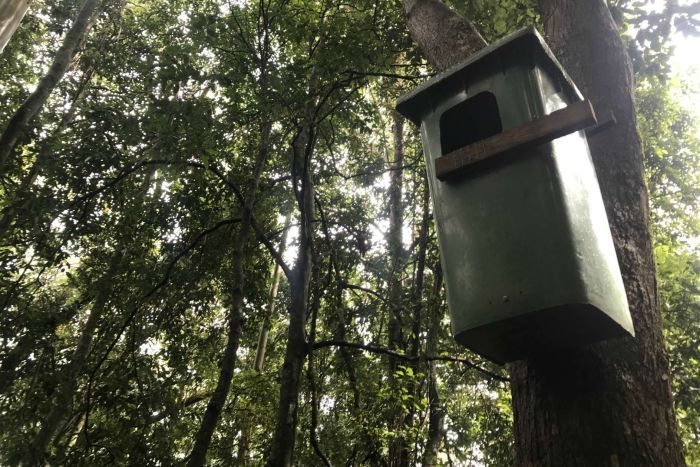 
Reject wheelie bins are being trialled as super-sized nesting boxes in an attempt to address a habitat crisis for some of Australia's largest threatened bird species.

It is estimated 42 per cent of Australian mammals,17 per cent of birds and 28 per cent of reptile species need tree hollows for secure nesting and breeding sites.
But those natural hollows can take more than 100 years to form, and clearing and development have taken a terrible toll on homes for wildlife. 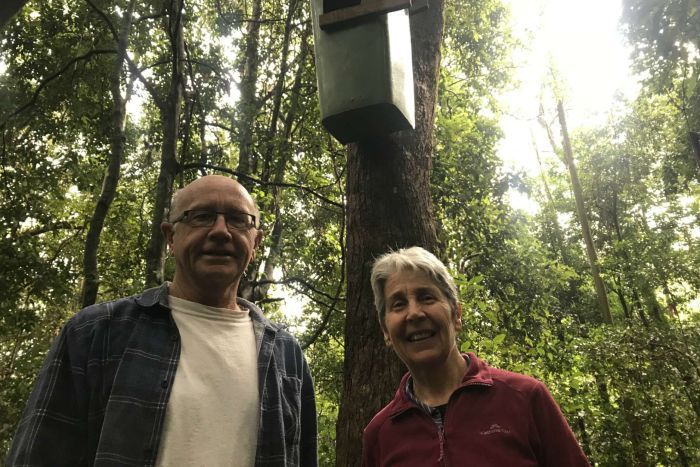 "There's nothing to compare this with in other countries, but there's a high dependence on the rotting out of holes when limbs fall off trees or trunks hollow out," Hinterland Bush Links founder Susie Duncan said.

"Many large gliders, possums, parrots and owls require these tree holes, but the problem we're facing is most of the trees here are less than 70 years of age.

"The area has been logged in the past and it will take probably another 60–70 years before they begin to form hollows for wildlife."

"I was just looking at our compost bin that we use, an old wheelie bin, and I thought 'Well, we can cut holes in that. It's light to sling up a tree.

"[Recycling company] Remondis have been really, really good in offering us their reject wheelie bins." 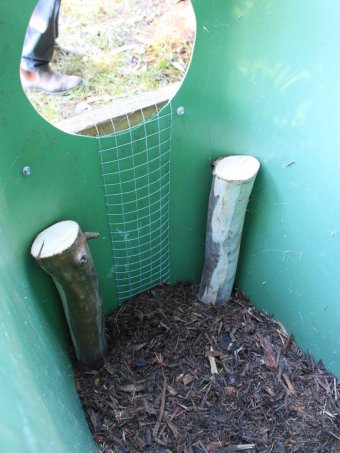 PHOTO: The wheelie bins have been kitted out with creature comforts. (Supplied: Susie Duncan)


"The area has been logged in the past and it will take probably another 60–70 years before they begin to form hollows for wildlife."

Wheelie bin interior design
The design includes a timber landing pad, with 25mm mesh feeding into the bin to act as a ladder for young birds to climb or beak their way out.

"At the bottom there are two chewing posts as well because they like to chew while they're sitting there, and there is 10cm of hardwood woodchip as nesting material, so it's a headstart for them," Mr Luthje said.

Ms Duncan said the wheelie bins could be particularly important for powerful owls and yellow-tailed black cockatoos, which needed large hollows that could take 200 years or more to form. 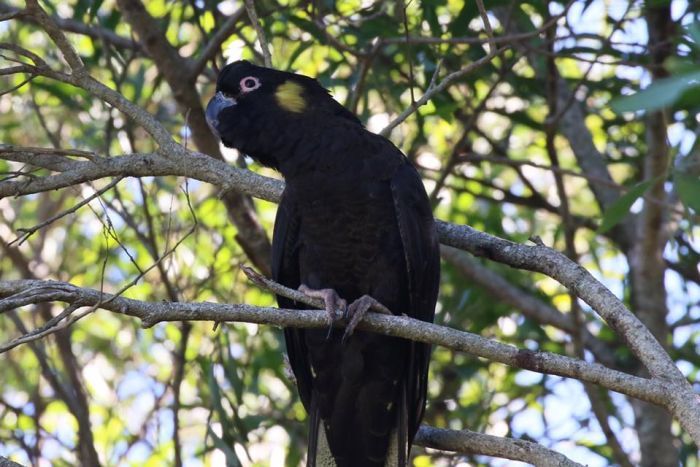 
"If we were to make nest boxes out of timber for these large animals, it's just impossible to consider getting them up into a tree, let alone the cost and the labour involved," she said.

Retired Department of Primary Industries officer John Childs has set up motion-sensitive cameras on his property to monitor the wheelie bin nesting boxes.

"This is all pretty exciting really. You can get these ideas from around Australia and give them a go. It's important that we look after them and recover these species if we can," Mr Childs said. 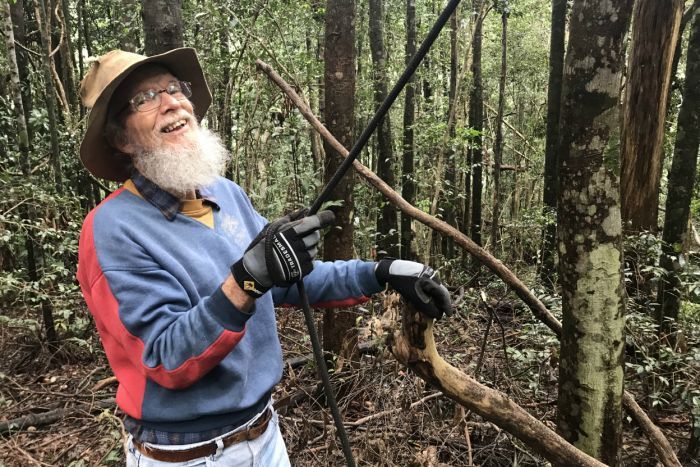 
Chainsaws for conservation
Hinterland Bush Links works with volunteers and landholders across the Sunshine Coast hinterland.

Volunteers have planted tens of thousands of native trees and shrubs, restoring corridors between patches of remnant bushland that wildlife can move along.

Their attempt to manufacture hollows is also trialling the use of chainsaws. 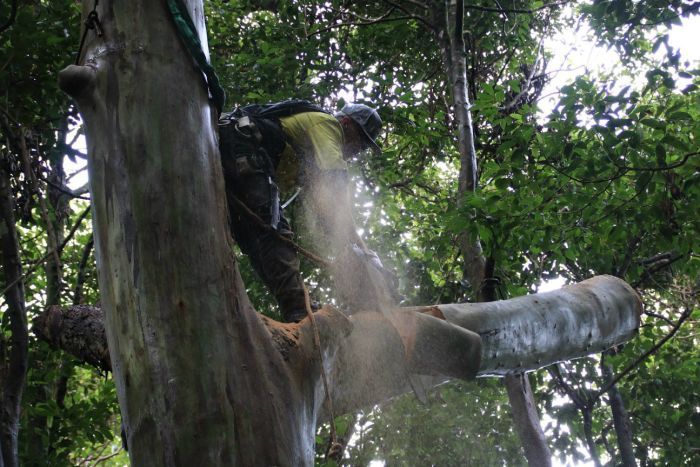 PHOTO: Arborist Matt Roy slices a 'door' from the branch. It will be replaced after the hollow is cut out. (Supplied: Susie Duncan)


Sawdust flies as arborist Matt Roy cuts a precise faceplate from a branch before carving out the timber below it.

He then replaces the faceplate with a small round entrance cut into it.

"By doing this we're actually just speeding along the process for these wildlife," Ms Duncan said. 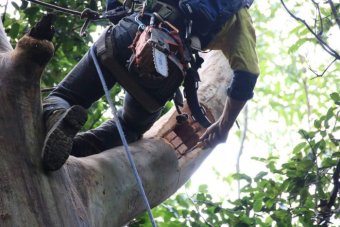 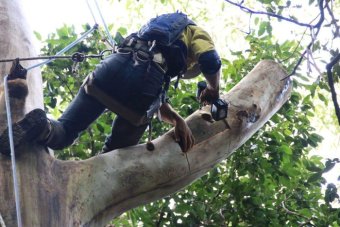 PHOTO: Step three: Matt Roy screws the 'door' back on, with a hole allowing access to the man-made hollow. (Supplied: Susie Duncan)


"There's been some great work done in Tasmania for the endangered swift parrot, and in Melbourne they're trialling a similar process for powerful owls, because in many of the suburban areas there actually are a lot of ringtail possums, which are great food for powerful owls, but there are no tree hollows."

In Western Australia, trials of a variety of artificial boxes to help the endangered Carnaby's black cockatoo have had some success, including using a "Cockatube" made from black plastic tubing recycled from mining sites.

The four trial wheelie bin nest boxes already in the trees are being watched with interest.

"The uptakes in 'natural hollow' experiments in Tasmania is virtually overnight. But I don't know about wheelie bins," Mr Luthje said.

"They [the birds] might have seen them landing in trucks before and thought this isn't the place to be.

"It's a big guess, but they're quick to produce. We can do about one every half hour.

"If they work we could put them all over the country in no time."

Turtle roadkill awareness needed to save Australian species under threat