A month or so ago, a smell appeared in the toilet room. I pulled the place apart thinking that a micro bat colony must have been in the wall. There were none.

Turned out to be a python in the ceiling under the polyester bats, just out of reach from the manhole. The ceiling is corrogated iron and it had pissed and dried urine and white **** had collected. I tried to lasso it with a pole and string but it just moved away. I was happy that I knew what the smell was and that it had moved.

Cut to a week later, smell in the toilet overpowering, it has an exhaust fan in it and that, when not on, was letting the smell though. I went back up and the snake was in the exact same position and again moved away before I could get it.

Question is, why don't I see on these forums complaints about smell from these things?
V

Because just like you don't let your dog/cat or other animals 'piss and ****' just gather in your house, reptile owners don't either, you pick up and dispose of the once a fortnight poo, and use absorbent substrate to soak up the urine... then there's no smell. Unlike dogs/cats and other animals there is NO OTHER ODOUR from reptiles, so people don't complain, as there is never anything to complain about unless you are a negligent keeper.
R

Vixen. said:
Because just like you don't let your dog/cat or other animals 'piss and ****' just gather in your house, reptile owners don't either, you pick up and dispose of the once a fortnight poo, and use absorbent substrate to soak up the urine... then there's no smell. Unlike dogs/cats and other animals there is NO OTHER ODOUR from reptiles, so people don't complain, as there is never anything to complain about unless you are a negligent keeper.
Click to expand...

I am not an owner. It is living in my house rent free.

random88 said:
on these forums complaints about smell from these things?
Click to expand...

Nearly all the people on this forum are owners. That's why you won't see many complaints here.
Snake poo and wee does smell, but they go so infrequently it's really a fortunate thing about pet snakes.
If a snake is living in your roof, I guess rodents are too. They wee and poo a lot more than the snake, and that would stink. If you got rid of the rodents, maybe the snake will move on.
If you use poison, dead rodents smell could be a potential problem, trapping and removing may work better, but it might take a bit longer. Good luck.
R

The ceiling space always has rodent poison in it just in case. We are in the country and have only had have rats or mice a couple of times in 20 years. Anticinus come into the house in breeding season but they do not smell when nesting. I live trapped a rat in the garden once, but it turned out to be a native version on close inspection and they don't do houses.

The house is of 'low allergy' materials, steel frame, corrugated iron ceiling, no plasterboard and paint only on interior doors. So we may smell stuff that others may not.

Just before xmas we called a couple of snake catchers but they were all busy or too far away, so I went cold on annoying it, thinking it would move on, but it hasn't.

Anyone in here with a permit that needs a snake?

Here's one we found on our driveway a few years ago. The one in the ceiling is not as big as that. 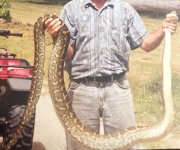 One of the worst smells in the reptile keeping hobby is a half digested regurgitated feed item (rat, mice etc)

It seems you just want the snake to move on. Carpet pythons are not necessarily attracted to roof spaces for food, but often for the warm and secure refuge they provide. Given the difficulty in trying to capture and relocate, then perhaps you can get it to move on of its own accord by making the spot where it is camping less desirable to it. Snakes really dislike the smell of mouthwash. Therefore, my suggestion would be to buy a bottle of mouthwash and a water pistol. Spray the roof area next to the python with the mouthwash, but definitely not the snake itself. Try that once or twice a week or so and see how you go. Hopefully It will get the snake to move house permanently.

That is one hell of a good sized, very well-conditioned coastal you caught and photographed. It is good to see you relocating it. At the same time, it is really pleasing to hear you can distinguish native rodents from the introduced species. I don’t think too many people would be able to do that. Being caught in your garden, it was most likely a Bush Rat R. fuscipes. Am also blown away that you have antechinus entering your house/buildings to nest. Most likely the Yellow Footed Antechinus A. flavipes, as they are just cheeky enough to do that. While the difference between this tiny marsupial and the introduced House Mouse is a little more obvious, again I don’t think a lot of people would be able to differentiate between them. It is awesome that you take enough interest in our native fauna to be able to do so. Good on you!

I can understand what you say about the smell coming through the fan opening. In the winter time, when I had turned on the air-con in my current dwelling, I could hear the exhaust fan above the stove-top spinning. Initially I thought I had forgotten to switch it off after cooking. But no, that wasn’t the case. It was the warm air escaping through the fan aperture. At the same time, I discovered I could feel cold air entering around the poorly sealed external door. To fix this I ended up cutting a circular piece of cardboard to fit in the bottom of the fan screen when not in use. That did the trick. I reckon all ceiling/exhaust fans should be made with a shutter that only opens when the fan is switched on.

R
Is it a snake or possum

email mate sent me spider mythology its quite funny and interesting